Racist ex-Dearborn mayor's name will be scrubbed from city site 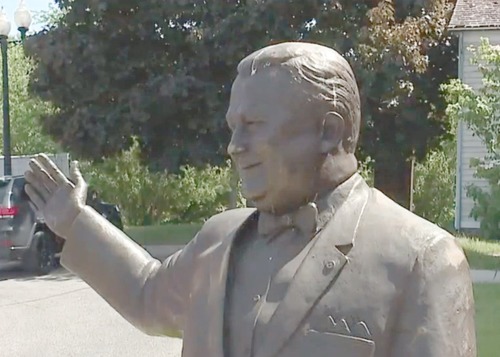 The imprint of late Dearborn Mayor Orville Hubbard, a segregationist who served 15 terms, is slowly fading, with city councilmembers voting unanimously Tuesday to scrub his name from a civic center ballroom. The move that follows removal of his statue from outside the city's historical museum last summer.

Councilmember Erin Byrnes tells the Free Press the move is part of an effort to "demonstrate inclusivity and a welcoming approach to everything we do."

Hubbard served from 1942-78. He was popular, but also a bigot who said things like: "I'm not a racist, but I just hate those black bastards."

Since his death in 1982, Dearborn has become the home of more Muslims than any other city in the U.S. per capita.

According to the Free Press, some opposed the removal of Hubbard's name, asking where the city would draw the line on "cancel culture." That includes Hubbard's descendents, who have argued he wasn't racist.

"Whatever the city may decide to rename, it will never cancel the beautiful memories of many who knew him and grew up in Dearborn," (said Susan Hubbard, a grandchild of Orville Hubbard's and a Wayne County Circuit Court judge). "Unfortunately, hypocrisy, division and moral preening seem to be the trend at a time when unity is most needed."