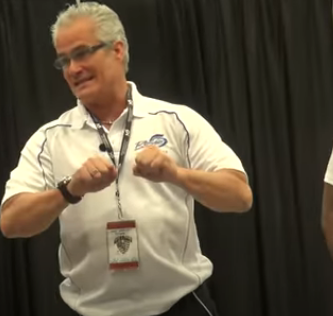 Lansing-area gymnastic coach John Geddert, who was linked to Dr. Larry Nassar, died of a self-inflicted gunshot wound Thursday afternoon after being charged earlier in the day by Michigan's attorney general with 24 crimes.

ABC News reports that he was found dead at a rest stop off I-96 near Lansing in Clinton County.

He was to be arraigned in mid-afternoon at Eaton County District Court on charges that included human trafficking, criminal sexual assault, lying to a law enforcer and racketeering.

Geddert, a mid-Michigan native and 2012 USA Olympic coach, owned Twistars USA, a prominent gymnastics facility in the capital area where multiple sexual-assault victims of Larry Nassar trained. In January 2018, USA Gymnastics suspended Geddert as a result of the Nassar scandal.

Attorney General Dana Nessel alleged in a press release that Geddert’s treatment of young gymnasts constituted human trafficking because he reportedly subjected athletes to forced labor or services under extreme conditions that contributed to injuries and other harm. Geddert then neglected those injuries that were reported to him by the victims and used coercion, intimidation, threats and physical force to get them to perform up to his standards, Nessel says.

The criminal investigation began after Nassar was locked up in February 2018.

“These allegations focus around multiple acts of verbal, physical and sexual abuse perpetrated by the defendant against multiple young women," Nessel said in a statement before the suicide. "I am grateful for these survivors coming forward to cooperate with our investigation and for bravely sharing their stories.”

She reacted to the death with this late afternoon statement: "My office has been notified that the body of John Geddert was found late this afternoon after taking his own life. This is a tragic end to a tragic story for everyone involved."