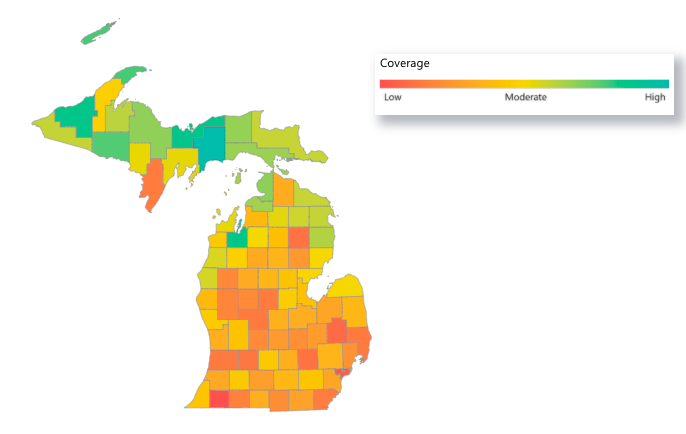 Detroit ranks second-worst in the state when it comes to the percentage of its population that has received a first dose of the Covid vaccine, new county-by-county data compiled by the Free Press shows. Compare that to the state leader,  Schoolcraft County, in the Upper Peninsula, where 31.1 percent of residents have been issued first doses of the vaccine.

Rural northern Michigan counties are faring far better when it comes to first-doses distributed, with Keewanaw at 25.5 percent and Ontanagon at 26.5 percent, the Free Press analysis shows.

Detroit is trailed only by Cass County, along the Indiana border, which has just 9.2 percent of residents vaccinated. Oakland County, Wayne (without Detroit) and Macomb have delivered first doses to 17.1 percent, 15.9 percent, and 14.3 percent of their residents, respectively.

Frontline essential workers, people in long-term care facilities and those over 65 are eligible for the vaccine under state guidelines.

The state is responsible for distribution and adheres to this approach, as explained by Bridge Michigan:

Gov. Gretchen Whitmer’s distribution model involves a mix of science and subjectivity, weighing population and other factors, including the number of older residents in a community and those in poverty, two groups that have been hard hit by the pandemic.

The state also considers a community’s “social vulnerability” — an index compiled by the Centers for Disease Control and Prevention taken from 15 factors including poverty, health issues and languages spoken.

Without using the index, a community with 10 percent of the population would get 10 percent of the vaccines, according to the state. But in an effort to address disparities rooted in poverty, age and health conditions, the state is taking into account the size of those vulnerable communities.

While the state hasn’t given the exact formula,  officials did provide an example: Detroit, has one of the biggest vulnerable populations in the state, would get 5 percent more vaccines than its population alone would warrant.