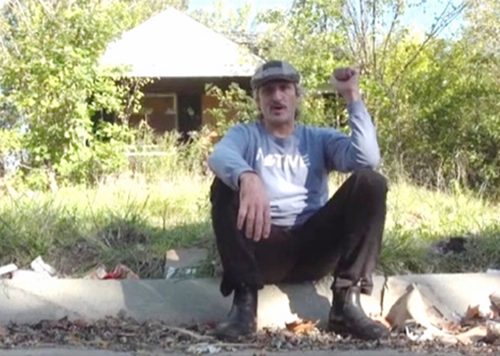 Charlie LeDuff in front of a blighted home near Pulaski Elementary-Middle School on Detroit's east side.

There is a little school in a tumble-down neighborhood on Detroit's east side, surrounded by a dozen unwholesome houses.

Students arriving by school bus to begin their day at Pulaski Elementary-Middle School on Lappin  Street are greeted by the evidence of profoundly broken promises to the city's children.

Neighbors complain that these blighted houses are shooting galleries for dope fiends and breeding grounds for vermin. Discarded needles and rotting rodent carcasses inside these house confirm their accounts.

Why has the city not torn them down? If not the houses, the neighbors ask, then the abandoned and blown-out apartment complex used as a drive-through sex emporium?

If not the apartment block, then how about the trash-strewn vacant lots?

It should be easy enough. After all, the apartment complex belongs to the city, according to online property records. The miserable and dispiriting houses surrounding Pulaski K-8 belong to the city's Land Bank Authority, as do the littered fields. (Disclosure: My wife works at the school.)

Mayor Mike Duggan, who holds unchallenged power over nearly every aspect of the city apparatus, has said repeatedly that the safety and well-being of our children is his top priority. Tell it to the people near this school.

“You complain but it don't do no good,” said Linda Baker. “Nobody downtown listens to us out here.”

It's election time, and Duggan is crowing about the parks he's painted and alleys he's cleaned. That's easy to say on a billboard. But out here, on the east side, the comeback just ain't happening. 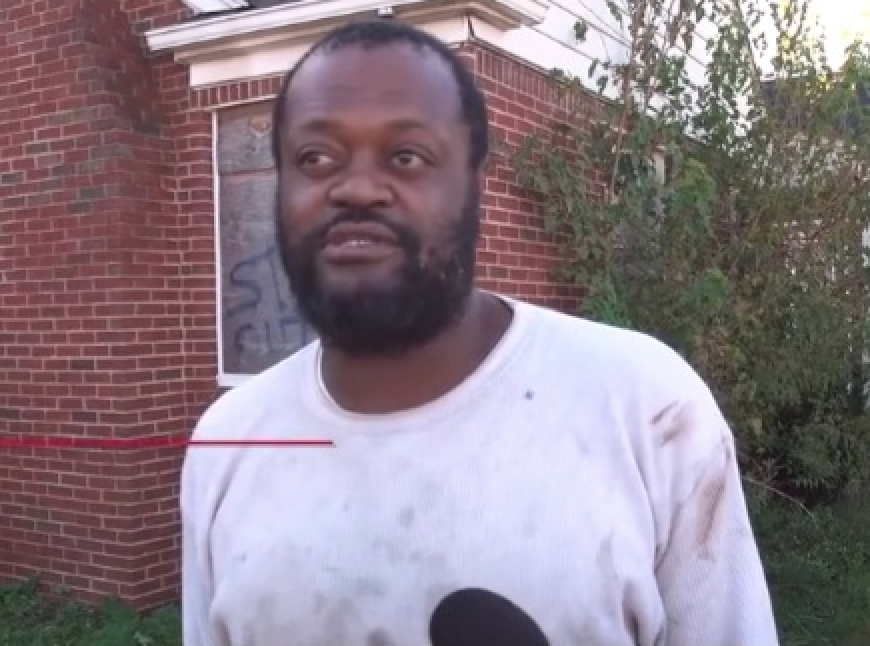 “We been calling for years about this house,” said Chris Frazier, who lives between the city's collapsing house and the little school that tries.

“We been calling since before my mother died, and that was five years ago. You know the kids be walking up and down the street. Kids could be taken in there, and nobody would know.”

Then there's the psychology of staring at this unwholesomeness, day after day, year after year. When you look at destitution long enough, it starts to become normalized. Some neighbors have schemes of torching the structures.

“There's a lot of weirdos walking up and down the street,” said Nathaniel Harvey. “Lot of weirdos. You got to look out for the kids and the babies.”

With the election less than two weeks away, and far ahead in the polls, Duggan plays rope-a-dope. He refuses to debate Anthony Adams, claiming his challenger runs a campaign of hate and negativity.

More likely, the mayor doesn't want people to be reminded of places like this. Or the half-billion dollars in federal and city funds squandered on demolition that was supposed to be directed towards places where children live, play and go to school. Or the two federal grand juries empaneled over the potential abuse of that money. Or the poisoned dirt used to fill the demolition holes. Or the serial killer who did his evil in houses just like these.

If there was a scene like this in the Bronx or Los Angeles or Royal Oak, for that matter, it would be headlines for weeks. Children Held Hostage in Hell, the headline might read.

In Detroit, you get crickets.

Don't blame the public school adminstrators or board of education. The school moved here as part of a redistricting plan two years ago. They wanted the blight taken down then. They want it taken down now.

The houses are the city's responsibility. It's just that city hall never calls back.

"In the end you've got to call on Mayor Duggan because he's got the power and he was provided the money," says school board member Sherry Gay-Dagnogo. "The promises and commitments were made, but a promise made has not been a promise kept."

I called city hall. Nothing. I went to city hall. They kicked out my cameraman and me.

When faced with tough questions, Duggan's office likes them submitted in writing. So here are two, Mr. Mayor: How long do the city's houses of horror stand? How long do you tell 400 children to f*** themselves?

♦ Support our commentary and reporting by becoming a Deadline Detroit member for as little as $3 per month. 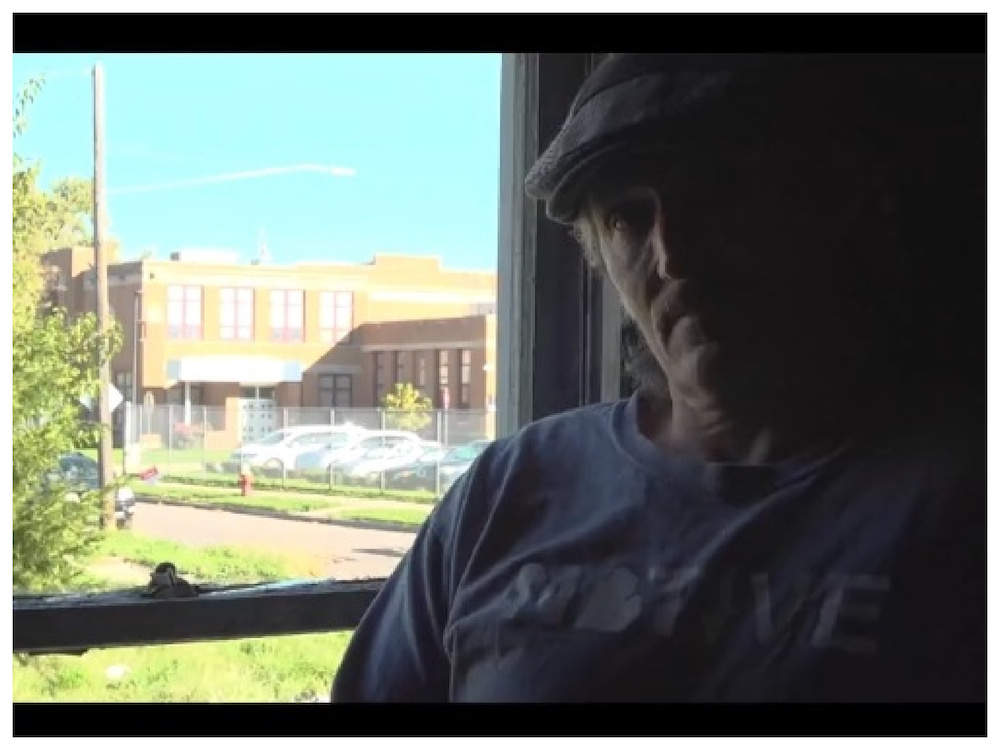 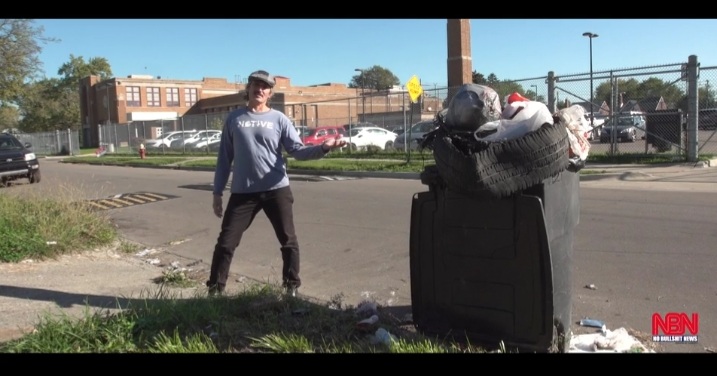 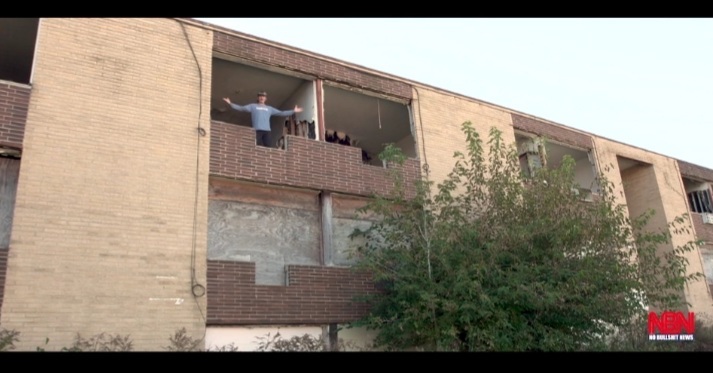 A vacant apartment nearby