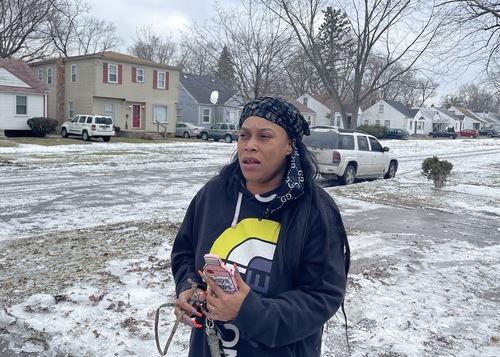 A Friday water main break turned a residential Detroit street into something resembling a skating rink, stranding vehicles as crews took more than four days to address it.

The scene on the city's northwest side was captured in a now-viral TikTok video.

"It looks like Antarctica out here," a woman whose mother lives on Harlow Avenue near 7 Mile says. "I started to call off work because this makes no sense."

The street was being cleared Tuesday morning, with crews breaking up remaining ice, the Detroit Water and Sewerage Department said. Deadline Detroit, however, saw no crews in the icy aftermath.

The agency blamed staffing shortages and other issues for the delays. It says it prioritizes water main breaks based on service outages, and there wasn't one on Harlow.

"The delay is a combination of getting other utilities marked before we excavate, the cold snap causing an increase in water main breaks and staffing shortages due to COVID-19 omnicron surge," said the agency's spokesman, Bryan Peckinpaugh. "Whenever there is a dramatic change in temperature, high or low, it can shift the soil underground and put pressure on water main pipes, and moreso on aging pipes."

DWSD is in the midst of a $500-million capital improvement program to upgrade the city's water and sewer infrastructure, it said. It's unclear, however, whether that will help the residents of this street.

Harlow Avenue has flooded at least annually since the early 2000s, said Dale McIntosh, who’s long owned a house there. That's when concrete debris from the construction of a house on one side caused the pipes to clog, he said. But instead of implementing a proper fix, the city opted for a cheaper, less effective alternative: running a pipe from one side of street to the other.

"It overloads the street every time it rains heavily," said McIntosh, who once filed an insurance claim to be compensated for damage and was later denied flooder's insurance. "But everytime we bring it up they just brush us off."

DWSD did not immediately respond when asked about the possible infrastructure issue.