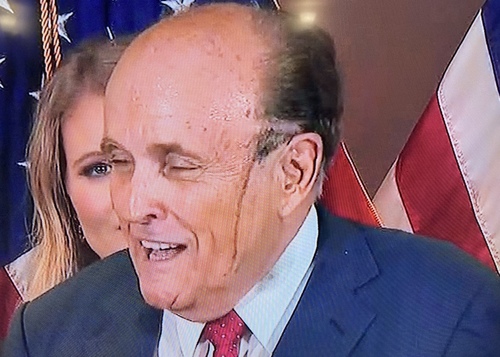 Rudy Giuliani did more even more wild shit in trying to steal the 2020 presidential election for Donald Trump, The Washington Post reports.

In the weeks after the 2020 election, Rudolph W. Giuliani and other legal advisers to President Donald Trump asked a Republican prosecutor in northern Michigan to get his county’s voting machines and pass them to Trump’s team, the prosecutor told The Washington Post.

Antrim County prosecutor James Rossiter said in an interview that Giuliani and several colleagues made the request during a telephone call after the county initially misreported its election results. The inaccurate tallies meant that Joe Biden appeared to have beaten Trump by 3,000 votes in a Republican stronghold, an error that soon placed Antrim at the center of false claims by Trump that the election had been stolen.

Rossiter said he declined. “I said, ‘I can’t just say: give them here.’ We don’t have that magical power to just demand things as prosecutors. You need probable cause.” Even if he had had sufficient grounds to take the machines as evidence, Rossiter said, he could not have released them to outsiders or a party with an interest in the matter.

The Trump team did eventually gain access to the machines from judge who had recently donated to the president's campaign, The Post reports.

A purported “forensic report” produced for (local Realtor William) Bailey’s lawsuit, created by a team that his attorney later described in a podcast interview as “forensic scientists and data collection scientists,” claimed that data gathered from Antrim’s machines provided evidence of sweeping fraud. The machines — made by Dominion Voting Systems, which had become a focus of election conspiracy theories — were “intentionally and purposefully designed” to manipulate votes, the report said. Experts have called that conclusion false and the report critically flawed.

The 23-page report was produced by a team that included Phil Waldron, the pro-Trump retired army colonel now best known for circulating a PowerPoint presentation before Jan. 6 that said troops could seize ballots. The report was signed by Russell J. Ramsland Jr., a conservative activist who has claimed since 2018 that elections were compromised and leads the Texas-based company Allied Security Operations Group (ASOG).

Antrim's election mishap was caused by a technical error, officials in that county have said. It's in the northwestern Lower Peninsula alongside Grand Traverse Bay.