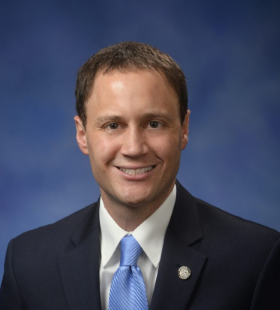 In a two-page letter to Michigan Republican convention delegates released Sunday, he trashes Republican attorney general candidate Tom Leonard, former state House speaker, and praises Matthew DePerno, a Kalamazoo attorney. It has to do with the 2020 election, of course.

"Tom Leonard represents the loser mentality of all the RINOs [Republicans in name only] who did nothing about the massive voter fraud and Democrat cheating in 2020," Trump writes, according to The Detroit News. "Leonard has been part of the establishment for 20 years."

As for DePerno, he writes:

"He is the fighter we all need to take Michigan back from Democrats, having led the charge in calling out the obvious voter fraud in the 2020 election when nobody else would." DePerno lead a lawsuit in northern Michigan's Antrim County claiming election fraud occurred there.

On April 23, delegates will meet to endorse a Republican candidate. The endorsed candidate still has to be nominated at the nominating convention in August to be on the November ballot. There is no primary for the attorney general.

Leonard lost his 2018 bid for attorney general to Democrat Dana Nessel, who seeks a second term.

"They know who who I am, and they know the truth. That is why we are so far out in the lead and the DePerno campaign is getting desperate. I'm focused on uniting this party, holding Dana Nessel accountable for her record and winning in November."